BYTEC has a new home

BYTEC/16 finally has a professionally looking rack enclosure. It is the same enclosure which I bought on eBay and described in this post almost 5 years ago. Yes, five years ago, when my homebrew computer was mostly designed but still only half built. Now it has a new home, seems to be much happier, and so is my desk. It looks pretty neat, too, although in retrospect, I wish I had given it more “blinky lights”. 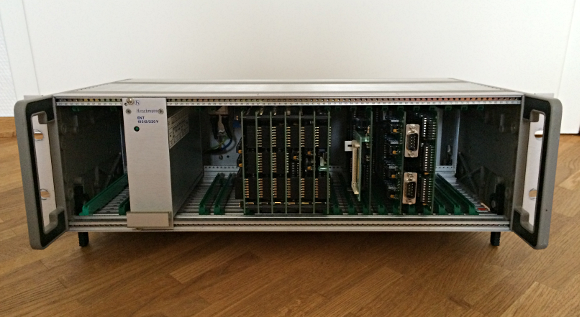 The enclosure itself is Hirshmann make, model ASGE 1-R and Internet wisdom describes it as “MODULAR CONCENTRATOR ETHERNET ACTIVE STAR COUPLER” case, whatever that means. It has Deutsche Post fixed asset numbers on the back, so it must be a surplus item. I don’t remember how much I paid for it. I see them new for hundreds of euros on eBay today, but I am sure I paid not more than fifty for the used item.

The case originally came equipped with a 5V/12A power supply and a backplane bus board which as you may expect was not compatible with my backplane connectors. I decided to keep the power supply because it matches the voltage specs I need (and seems to be a decent PSU anyways) and completely removed the backplane in favor of my ribbon connector by simply unscrewing it from the back. I also had to remove and adjust a few rails (those green ones on the photo) because my CPU board spacing did not exactly match their spacing, but that was it. Mechanical fitting took no longer than 30 minutes of work.

Where I struggled a bit was how to connect my CPU to the new PSU. The unit has a male 15-pin Harting connector (H15) on its back which connects to female counterpart attached in the back of the case when the CPU is slid in. The female connector in turn exposes on its back 15 terminals intended to be connected with crimp connectors. As you probably guess, I bought the case with no documentation at all, and had no idea which terminals are +5V and ground. After some research I found this photo of a label taken from a drop-in replacement PSU from a different vendor:

Bingo! The wiring of the mains supply in the case matched the above description, so at least I was confident that this part is done right. I quickly wired the sense terminals to power and ground, powered it up and measured the voltages on specified pins to see that they were as expected. There was no smoke and no flash. So I wired everything up like this (still shorting the sense +/- signals to +5V and GND): 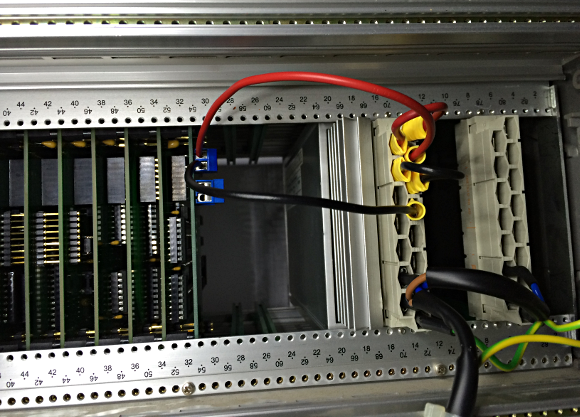 The blue screw connectors sticking out of the CPU were placed on a tiny adapter board which I had manufactured specifically for that at Seeed Studio (yes, I now have spare 9 such connectors).

The adapter stacks on top of the CPU and has one connector intended as input and two spare connectors for powering other devices (e.g. a compact flash card). Alternatively, the large 4-pin footprint can be used to solder a molex connector onto the adapter is I ever decide to use a standard ATX power supply. For the time being, I left it unpopulated.

I know that putting a computer in a case is not a big deal when compared to its design and build, but still I consider it a milestone. Now I have fully transitioned from prototype version to something robust with a “finished” look & feel. This marks the first revision of BYTEC/16 hardware complete.