Finally, after a very long wait, I have found an envelope from BatchPCB in my mailbox. I placed an order on November 1, 2011 for two euro sized boards in a hope that I would receive them after three to four weeks. I received them last week, so after more than four months. That’s way too long. The fact that my first boards shipment was lost by the carrier contributed a lot to the order-to-delivery time. Eventually, BatchPCB offered to redo my boards (although not without exchanging several emails in which I expressed my disappointment with increasing intensity) but they did not seem to be in a hurry with panelizing my design again. It is quite probable that I will use BatchPCB again anyway, because they are one of the least expensive choices for prototypes, but from now on I will always use more expensive expedited international shipping (with insurance and tracking). Always, with no exceptions. 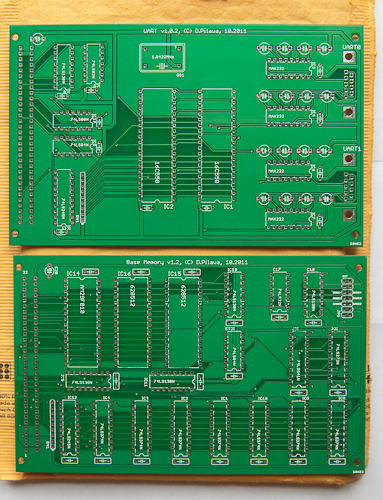 Unfortunately, extended lead time was not the only problem I have encountered with this order. I noticed that the boards silkscreen layer quality is inferior to that from some time ago. I am not sure if BatchPCB have changed their vendor in China, or it is just a temporary problem, but it is noticeable at the very first glance. The photos below compare silkscreen from July 2010 and February 2012 (note the difference in crispiness and continuity of the lines and text).

Apart from the messy silkscreen, the rest seems to be fine. Quality of electrical traces, board edges, pads, drill hits look exactly as I expect them to look, and more importantly, as I designed them. Another point on positive side – I have received not two but four boards (two each). Apparently, BatchPCB had some spare panel space, and I was among the lucky ones to receive a surplus.

Time to break out the soldering iron!