I have just returned from a two and a half week training combined with short vacation. I haven’t posted for a while but the project is well alive and it will regain momentum now when I am back home. Immediate plans are to complete the Monitor/OS with a little help of a nice gadget described in this post and then start working on software emulator of the CPU and the C compiler port (most probably it will be a port of LCC).

Although still very much work in progress, it is slowly taking shape. I currently have a decent interrupt-driven RS/232 driver with support for hardware flow control running at 9600 bps. Higher baud rates are possible but I have not yet tested for stability. I also implemented some helper routines to print and get strings, hexadecimal and decimal numbers. Kernel routines exist to detect available RAM/ROM and installed devices. It allowed me to develop this (screenshot of terminal program connecting to actual hardware via serial): 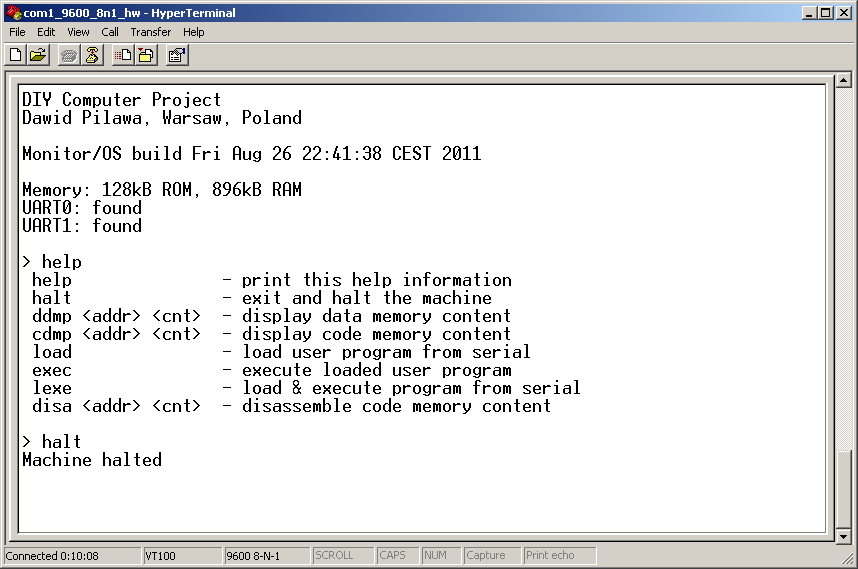 Most shell functions presented in the screenshot are still only stubs (or very early drafts) but it gives an idea of what I want to achieve. I want the monitor program to be able to:

That seems to be enough to start with. I don’t want to over-engineer the Monitor/OS as it is not my ultimate goal. I want to start working on a C port as soon as possible to be able to port some “serious” software. Assembly programming is fun and mind stimulating, but awfully slow. 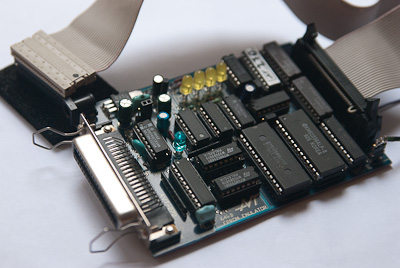 A colleague at work called me one day and offered to borrow this little gadget that should help me to dramatically speed up the development process of Monitor/OS kernel. Last time I reported that it is ineffective and somewhat disconcerting to burn kernel ROM whenever I want to test my new (oftentimes faulty) code.

It is an EPROM emulator which you connect by a ribbon cable to a socket where you normally have a ROM chip. It simulates the EPROM by using internal SRAM which is easily programmed by a standard parallel cable when the device is connected to the recipient and the PC. It does not require external power supply (it draws power from the emulated chip’s host). For a PC this device is essentially a printer, so programming its SRAM is as easy as copying a binary image to /dev/lp0 in linux. It is really simple and should give my software development a nice boost. No more ROM chip pulling, programming, or continuous laptop rebooting to run my Windows based EPROM programmer software. It should reduce the time from assembly coding to execution to as little as few seconds, as opposed to few minutes minimum of frustrating manual work I have been experiencing so far.

I haven’t yet given it a try but I studied its documentation and I am pretty confident that it will work with my setup. All I need to do is to build my own custom ribbon cable to match the pinouts of my 29F010 bios/kernel EEPROM chip. The emulator is limited to 64kB but I should be able to easily overcome this limitation, too (currently I am using all 128kB of my ROM chip by placing data segments in the upper 64kB, but this is only for convenience). I will work on it during next weekend’s session.