As I am working through the microcode (and the microcode assembler) this finally required me to sketch a block diagram of the entire machine and the CPUs internal datapaths. The microcode is not ready yet (I have completed about 20 most typical instructions), neither is the assembler (I am adding features to the lexer and parser as I write microcode for new instructions). I hope to share it in a week or two, before I start working on the simulator. Meanwhile, I am posting the block diagram in a hope it is final and will not change significantly. Most instructions are computable in a reasonable number of clock cycles, so I am assuming it is more or less complete. The diagram depicts all elements relevant for microcoding, with the level of details sufficient to track data flow for each of the instructions. 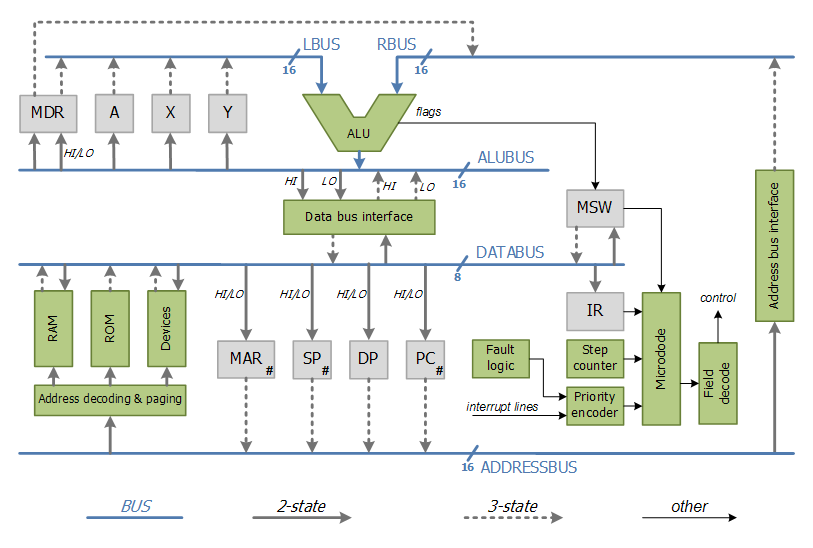 There are 6 programmer visible registers and 4 registers used internally by the CPU.

There are also two bus interfaces allowing to join buses when necessary.

The memory subsystem is presented now as a high-level address decoding and paging block which will be responsible for translating a 16-bit logic address (+1 bit of code/data segment selector) to a physical address pointing to physical memory (RAM/ROM) or devices. This functional block will be also responsible for paging (by means of a dedicated page table, accessed and manipulated only by dedicated instructions working in supervisor mode). I still need to think about this.